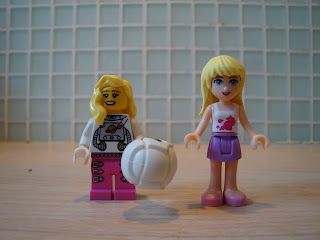 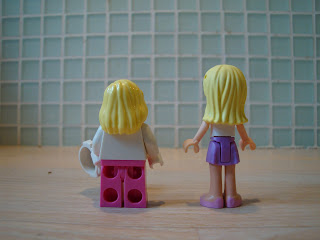 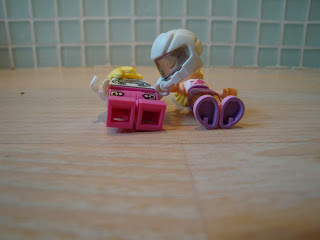 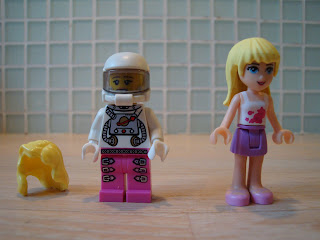 Yes, there are other important topics out there for the Danish minister Manu Sareen to pay attention to. I am not certain if they are more important than the commercialisation and gendering of the childhood.
Posted by Torill at 10:48
Labels: children, culture, games, gender, lego, play

I wish I remembered where I read this (maybe the NYTimes), but apparently this is the result of intense market research by Lego to find out why (most) girls would not play with Lego.

These were the results. In particular, their research told them that the old form Lego was unattractive to young girls, and a major reason they did not play. So they are trying a new form.

I think it is unfair to fault Lego for this. Girls did not buy the previous Lego, so they are trying something new, something that is backed by research.

Hello Rohan
No, I am not blaming LEGO for wanting to make more money. I would like to see their research though.

While we are waiting, here is a really good blogpost about Lego, the gendering and the history. David Pickett at Thinking Brickly does a good job at tracking the changes in the LEGO Universe, and the one thing he points out by looking at LEGO history, is that other figures than the LEGO mini figures really never worked out.

He also points out that the feminine gendering of the LEGO is parallelled by the extremely masculine gendering which has driven most of the innovation since then. So by designing for boys, they have lost the girls. Now they want to design for girls, but do that by repeating old errors.

And really - unfair to fault LEGO for this? They are the ones making the design choices, all the way. Girls bought LEGO. I bought LEGO for the girls, until they stopped producing anything I (and many with me) wanted to buy. That's really not the consumers' fault.

You're making a big assumption that girls bought Lego prior to the recent focus on boys. I think, and from what I remember from the article, that assumption is incorrect. Your girls playing with Lego is outside the norm.

I would require some sort of proof (ie not anecdote) that a significant portion of the audience for Lego was female back in the day.

It's very arguable that the shift to extreme masculine gendering for Lego was the company focusing on their core audience, on the people who actually purchased Lego, in an effort to increase sales.

Rohan, Since neither of us have the LEGO data, we are both working with anecdotal information. Your claim that I, my female friends, the girls I bought LEGO for, the daughters of my friends and most women and girls I have discussed toys with are anomalies is just guesswork. Until you (or I) get access to the research you vaguely remember a mention of, and can share it, this argument goes nowhere.

What it comes down to is that LEGO is, undoubtedly, gendering their toys. I am not the one doing it. I would really like LEGO to offer girl type toys which do not restrict the options for the girls, the way their other attempts at girl-only design lines do.

The basic legos don't seem at all manly or masculine. Building with blocks, which is essentially what the basic legos are, better blocks, is not a male activity. It's something children do. Why would girls stop?

It could be argued either way, that these new legos are a transition into normal legos and therefore expand the options for girls, or that they are separating them from the mainstream legos, further reinforcing gender roles with a plethora of pink.

I would also like to see the original research. I always thought girls played with Lego until I recently heard girls apparently don't. I and my sister did, in the 70s. My daughter did, in the late 90s and early 2000s -- with plain Lego, and Belville Lego, and Harry Potter Lego. The Belville was just Harry Potter Lego in different colours and with fairies and princesses reminiscent of the "friends", actually. It was fine, although I preferred the regular sort. Hard to get the regular sort anymore though, they barely sell it. Now my 3-year old daughter loves Lego - but she's still on duplo which is nice and gender neutral.

I never noticed girls not playing with Lego in my world, anyway?

Thanks for the I depth analysis, Torill. I had been wondering what they're actually like.

This is certainly the first time I've heard that girls didn't play with Lego in any significant numbers! I've heard that they do less often now, but literally *everyone* I've spoken about Lego with has talked about how it used to be more interesting to girls, it was a good gift for girls, it was something girls and boys could both play with, etc.

Lego does the classic digital game error, and designs girls into subordinate damsel with chains position. The only Leia figures I found in their own online shop is Leia as slave http://shop.lego.com/en-US/LEGO-Star-Wars-Magnet-Set-Boba-Fett-Princess-Leia-and-an-Imperial-Royal-Guard-852552

The other Leia picture is not for play, but a dressed Leia on a key chain. They have the option of putting the best space heroine of all times into their range, and use her only as slave? Where is princess Leia, ambassador Leia, freedom fighter Leia, pilot Leia?

I think Jill has the best clue here to why girls don't buy as much as boys. The neutral LEGO is really hard to find. That is why I didn't buy LEGO back around 2000, when I had nephews and nieces I would like to buy presents for. It was all gendered to a point I was quite uncomfortable with.

I thought the main reason was that the stores in small-town Norway made such traditional choices when they picked which LEGO to buy. So this last Christmas I went to the large LEGO store in Copenhagen, hoping they would have more options. While I found a wonderful wall where you could create your own building kit, buying LEGO by weight, I had to look really hard for regular LEGO boxes. And the gender neutral LEGO consists of mixed building bricks in different sizes. That's it, no nice sets mixing princesses and knights, equal-opportunity astronauts or kick-ass librarians of both genders.