When I started working in Volda in 1991, it meant moving towards where I grew up. The light, the air, the mountains, the language, it all resonated deeply with me, and I felt like coming home after years in Bergen. The kids would grow up with clean air and wonderful nature, in a small community where they had space to roam and where we felt safe about letting them take themselves about where they wanted - and where they knew where to find us, how, at all times of the day. It worked wonderfully for us all, but now they have moved out, my mother, who was an important reason to move to this area, is dead, and the only thing keeping us here is a too-big house and our jobs.

And now I am changing jobs. From the middle of July I will be at the ITU in Copenhagen, Denmark, working with so many wonderful people I have learned to know over the years. I will teach in a field more closely related with my research, and I will do my research around people who can both understand me and challenge me.

It's both a very sad and a very happy decision. I am leaving a place I have grown to know so well, taking the leap into the unknown, moving from the countryside to the city. At the same time I am going towards something I have wanted more and more over the last years, new challenges, new opportunities and, not the least, a change in problems. I am realistic enough to know that it won't be any easier to work in a new place, but I am looking forwards to some variety in my frustrations!

I still have some months left here in Volda, but the energy of the move is quite envigorating, and I am in some odd way both very much present here, and very preoccupied with the move.
Posted by Torill at 10:06 1 comment:
Labels: personal, workrelated

Want to work in Volda?

There are currently two positions open at Volda University College for people interested in ICT, design and education:

The final date on both positions is 7th of April, and for more information, contact Dean Aud Folkestad at +47 7007 5310.
Posted by Torill at 18:01 No comments:
Labels: positions, volda10, workrelated

Life among the mountains

Living among the mountains dwarfs you, but also lifts your eye and your longing to the peaks, it makes you want to get up, above the valley and the fjord, up to where nothing hinders your vision. 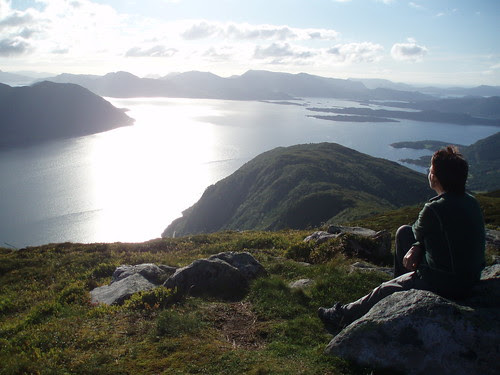 In summer, it's a good life, the challenge is scaled to your ambition, and the reward is a sense of being on top of the world. During the winter, however...

After three avalanches caused considerable damage and closed off the roads leading in almost every direction from here, roads have been closed in most directions. On this list (it may expire) there are 18 closed roads today, closed due to avalanches or danger of avalanches. Four more are under consideration. After a winter of snow in several layers we suddenly have rain and a thaw. It's undermining the snowmasses and loosening that which so far has been stable. Spring does that - and this year more so than ever.

I am not planning to drive to Ålesund this week-end, and if I did, I'd go out towards the islands: Tunnel, bridge and ferry, to get around and away from the mountainsides. I don't want to get caught by anything like this.

In normal years there are always avalanches, or "ras" or "skred" as they are called here. This year however, in addition to the known spots of danger, new areas are hit. And so we lose buildings, and people are in danger, like this mother and her eight year old daughter, who outraced an avalanche by car.

If you were to fly above this area in a small plane, you'd notice that there is no immediate logic to the spread of buildings. There will be a few houses close together, then nothing for a while, even if there may be wide, nice fields there. Then perhaps, one house built prominently on a rock, and then nothing again, for miles. No, it's not like that just because people wanted to live close together or far apart, depending. It's the spots where a building stands the best chance of surviving the winter.

We learn to live with the danger, and there are even people who make a living from maintaining communication in the face of danger. Recently, one machine was taken by an avalanche while clearing the road of snow. The people in it were able to run clear. As I type, others are assessing the danger of avalanches along the roads, at great risk.

Standing on top of a mountain, it feels like you own the world. Buried beneath it though...
Posted by Torill at 09:47 No comments:
Labels: avalanche, snow, volda10, winter

This one was just too good to pass by. Thanks Nick!

Posted by Torill at 08:06 No comments:
Labels: filesharing, humour, music

Sometimes I just forget that I have done something, and then it pops up and I go "Oh, yeah, right, I did that." It sounds horribly arrogant, as if I don't care, and I don't like this part of myself. You see, I do care about the articles I write and the work I do. It's just that when I have finished something, I put it behind me and move on, and sometimes I put it a bit more behind me than I really planned, you know. And then, more times than not, I go: "Oh, I wrote this as well. Huh, I almost sound smart!"

One such item is the upcoming article in E-learning. Issue 7 is on Game Design Literacy Practices, and my article in it is "Training, Sharing or Cheating? Gamer Strategies to Get a Digital Upper Hand." Heavily inspired by Mia Consalvo, I write about theorycrafting and the use of specialised gamer sites, where gamers go to help each other learn or develop those mad skills they later use to impress each other with ingame.
Posted by Torill at 09:49 No comments:
Labels: e-learning, gamewriting, Gaming, publishing

Yes, I am part of organising a conference with a major buzzword in the title. Hence, imagine my delight when I found a nice visualisation of this and some other recent buzzwords in Academia: