What the world owes you - lessons from a meme

There is this meme making the rounds, and it popped up in my feed. I saw it enough that I want to just rant a little about it: 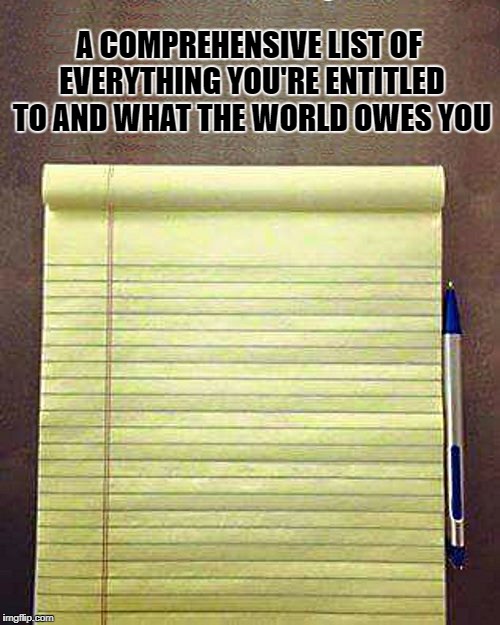 In the comments at imgflip, where I found this picture of it, somebody had edited it to say: Life, liberty, pursuit of happiness. This is from the US declaration of independence, and was not at the time considered self-evident, but a goal for a new nation to strive towards. Much of the rest of the western world agreed, and when United Nations drew up the Universal Declaration of Human Rights, it was drawn up along the ideal that humans had certain rights to seek a good life through legal means.

What we tend to forget these days is that this is an ideal. As this meme points out, the world as such owes you absolutely nothing. Some institutions are working very hard in order to make sure that you and everybody else have some rights: mainly the right to live as happily as you can within the law. But nobody owes you this. Quite the opposite: you (and I) owe a debt to those who went before us, and those who work now, to uphold these ideals. That debt is owed to everybody from the officials and politicians working to ensure these ideals, to your neighbour paying her taxes, doing her job, sorting her trash and raising her kids to support a world where human rights can be a reality and not just an ideal. If you don't participate in that it doesn't matter how rich or privileged you are, nobody owes you anything.

While this is harsh, it is a reminder that if we want to be taken care of, we need to care for the society we live in. There has to be some kind of exchange, even if it is at a few degrees remote. Only through a universal dedication to caring for others can we be certain to be cared for. Which, for those who are inclined that way, is what it means to be a Christian.

give, and it will be given to you. Good measure, pressed down, shaken together, running over, will be put into your lap. For with the measure you use it will be measured back to you. Luke 6:38.


And while I am quite agnostic, a lot of the new testament just makes sense as to how to treat others to live in peace, freedom and happiness. And that isn't something the world owes us - it's what we owe to others.
Posted by Torill at 15:01 No comments:

I bought a Hövding bike "helmet" - they call it air bags for your head - because I am vain. I also bought one for my husband, because he hates to wear a helmet. These are the main reasons why people buy this very expensive protective gear. My husband tried it on, and went straight back to the store. For him, it was much worse than wearing a helmet. At least he came back with a new helmet which he now occasionally uses.

I kept using mine. I particularly liked it when my hair was up, because I have long hair and a regular helmet doesn't fit over a bun. Today I put my hair up, put on the jacket and "helmet", reached for my keys (not suddenly. I am a sedate, middle-aged woman), and heard a loud bang. The airbag blew up while I was still standing!

They do warn that you should not walk with this, but the movement I made was something I could easily do on a bike, a soft turn, like leaning over while turning right. And if this had happened while on a bike, I would have had a real accident.

That, sadly, was not enough. My head was pushed forwards, and for a moment I was trapped in this high collar. It turned out that the airbag impacted with my bun, and pushed my head away and forwards, rather than enveloping it protectively.

I was devastated. I loved the idea of this technology, and was planning to buy it as presents for others in the family. Now I am very happy I didn't. This flaw is serious, it could cause an accident, and get me badly injured in the accident it caused.

Luckily I also have a very good looking bright red helmet, and was able to get to work almost on time.

I have lodged a complaint about this. It is not a prank, or something I post in order to ruin anything for the designers. I really wanted this to work, and have used it, expecting to be protected, for more than a year. It has also protected others I know, personally. But mine exploded for no particular reason.

#Hovding #Hövding
Posted by Torill at 12:04 No comments:

Last year in Bologna, I had the privilege of easy access to the world's oldest University. Since then I have had several people go: "there must have been something in.... (insert ancient culture here)", but it's easy to counter by pointing out that the University in Bologna is still up and running.

What that does not tell us though, is that no, the University as we know it was not established in 1088. Rather, what we saw at that time, was that some people who were already exploring grammar, rhetoric and logic were broadening their field, actively meeting for discourse, and teaching others. From this, and from other, only sightly newer institutions in England, what we understand as the western university grew.

But it wasn't that simple. Norway, for instance, didn't get a university until 1811, when what was at the time Det Kongelige Frederik's Universitet was established in Oslo, then Christiania (Frederik and Christian were the two most popular names of Danish kings.)

The establishment of this university, along with the liberation of Norway from Denmark and the subsequent creation of a Norwegian constitution, led to a movement of Norwegianness which meant the development of a Norwegian language. The life of students was carefully recorded, by Knut Hamsun in his novel "Sult" or "Hunger", and by Arne Garborg in "Bondestudentar" or "Peasant students". Very different in language, tone, plot and aim, they still both describe a transition - a movement from a society where it was not common to be educated into a society where studying was not only a possibility, but also a goal.

Today we are seeing another group of students who have to leave their culture, their past, their familiar structures and their families behind in order to gain a coveted education. Like the student in Hamsun's Hunger, they struggle against their own abilities, intellect, imagination and desires, and like the peasants turned students in Garborg, they struggle against their own betrayal of their past, and their inability to smoothly integrate into the culture at the university. What we are seeing is whole nations - gigantic nations - attempting to make the class journey that the peasant students did when moving from the countryside to the city. And they try to do it by going abroad.

Where Garborg's students needed to learn Danish and let go of their Norwegian, two languages still related and fairly close, today's class-traveling students change language, culture, national institutional structures, what almost become entire worlds. They leave everything familiar behind, and fight to survive in a tight, stream-lined and carefully bureaucratic educational system. The question isn't why they fail. The real question is how do they manage at all?

The peasant students in Norway eventually changed the educational system. They created a new language, so they would not have to study in a language which was not their own. They established more universities, and eventually district colleges, so their sons and daughters didn't have to travel that far to get education. They made it all free for all who wanted education, and they made lower level education mandatory. This educational system had very little in common with what was created in Bologna in 1088. The only thing, actually, would be the desire to learn and to teach. All the rest was built upon a mixture of learning structures and cultures, on the hopes and dreams of local scholars, and on politics and nation building.

This is what has to happen (and hopefully is happening in several places) in Asia, the Middle East, Africa. The desire to learn and to teach needs to find local, sustainable outlets. Teaching thousands and thousands of foreign students in Australia, USA and Europa is not a bad thing at an individual level. For one strong, resourceful student, a period of learning abroad can be a wonderful, formative experience. But as a system for the development of a nation it will - should - fail. Nations need their intellectuals at home, working, solving problems and educating new intellectuals to meet the specific problems of the future. Buying that education from expensive, western Universities only helps so far.

As for the students who come so very far only to fail... Arne Garborg gets it.


"He flipped the tassel to the back; to the front; left it right on his shoulder; no. It did not get the right turn. And the coat, - the coat fit, like all his coats had fit. He didn't look like a student. He wasn't a student. He was a peasant in disguise."