The burden of the past

In New York I went to MoMA, where Beijing based artist Song Dong has an exhibition called "waste not" this summer. In this work he celebrates the values of past generations, by offering to our curious eyes that which is today considered waste.

Pieces of fabric used for clothes, saved in case of patches or alterations, old shopping bags, a broken kitchen oven, bottles, jars, boxes, ribbons, worn shoes, the exhibition was a large display of what you can find when you empty a house after the passing of its inhabitant, particularly if it was one of the thrifty ones of older generations.

This week my sisters and I have been looking through the relics of our mother, slowly sorting through her treasures. Modern-day women as we are, we are throwing it all away, wasting, as her treasures have been going to waste over the last 20 years. But each piece has its own history, poignant reminders of our past. And it's not just that we recognize the curtains, the old clothing, the boxes and bags, but we all know how it could have been used. We spent long hours cutting the old clothing into material for rugs, we made a lot of our own clothes and clothes for each other, we knitted, and remember the many spools of yarn - what they were used for, and what they were supposed to be used for. We know the year the old marmelade was made, we know the pieces of wood and the materials, and even the many rocks of our mother's collection for the hobby she wanted to engage in, cutting and polishing stones, are objects wose potential we know. This house was one of activity, of reclaiming the broken, the torn and the spoiled as well as of creating new things from nothing. The garden is a powerful reminder, even in its neglected state it hides secrets of herbs, berries and salad leaves. 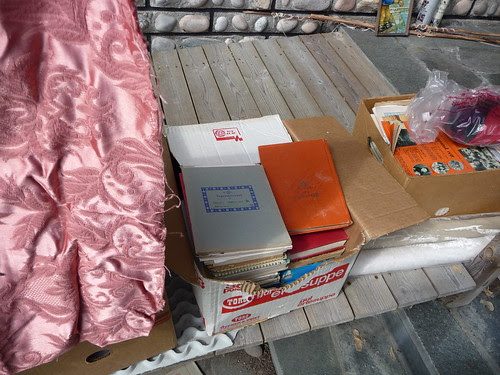 Now we are carrying all of this away, throwing it out, and even in this context I choose for display a picture which does not fully display the disorder, the sad state of all these resources from the past. It helps, as I do this, to think about the exhibition at MoMA, which somehow prepared me for this process. My mother could have filled that museum floor with all she had stored up. And oddly, I wish I could have shown it to her, let her see how stored resources can be both trash and art at the same time.

I suspect the rest of my life will be filled with moments like this one, when I wish I could have shown this or that to somebody I have lost. It's part of still being alive.
Posted by Torill at 10:19 1 comment:
Labels: art, past, personal, remembrance

I am seriously considering a change of career. Particularly the dress-code is interesting, not to mention the fact that curses, nasty laughs, wickedness and mysterious behaviour is part of it. Also, I would get to have lots of cats at work, and run and hide if somebody got particularly unpleasant. Candles will probably be a work expense, and it ought to come with its own cauldron.
Posted by Torill at 10:28 1 comment:
Labels: humour, workrelated

From heaven to frustration

Just before Easter this year, I bought a new machine, a big, powerful gaming lap-top from Asus, on Hilde's recommendation. I loved it, despite the bulk (which makes it more schleppable than portable); the speed, the power the graphics - yes, I felt empowered.

The motherboard is most likely dead. I have to mail the big thing in for repairs. And to do so, I have had to fill in their forms, and read the language on their sites. Now, the very polite and helpful clerk at the helpdesk had an accent which, for dialect-sensitive Norwegians marked him as originating from outside of Norway. He spoke perfect Norwegian though, no problem with understanding there. I don't think the following issues originate with him.

Once I started reading on the Asus help site, the problems started. First, the site did not like the signs I used. I eradicated all the Norwegian letters, æ, ø, å, which so often create problems. My mail was still not accepted. Then I removed all the "", and if that wasn't enough, the () was going next. This time it went through, though. And then I got to see the high point of the experience:

Now, if you're not a fluent Norwegian speaker, there's no problem. But Norwegian has genders, which influence pronouns, and the word "opphenting" means literally "upfetching", as ridiculous in Norwegian as in English - unless they arrive with a helicopter and actually fetch the machine "up". Also, they aren't fetching the machine at all, I have to mail it to them. Not to mention the simple typos. So: Bad grammar, nonsense words, typos and imprecise content.

Right, my English isn't perfect, far from it. That's why I, when ever I have a chance, use proof-readers. It's part of being a professional in a formal context: you make sure you make a good impression, and you can't be misunderstood. (Before I get slammed to death with my own typos, I don't consider this blog a formal context, it's just my personal writing, my responsibilities, my errors.)

I have a bad feeling about this experience. Very bad. It's making me regret I didn't spend a little more and got the Dell which was the alternative.

I am crossing my fingers, hoping, and hugging the new, shiny, functioning machine the college got for me, just a few weeks ago. Also I am praising the fact that I did some maniacal copying of the most important files just before I went to the states, and my recent habit of putting the pictures on a remote hard drive. I just may have been very lucky with that timing.
Posted by Torill at 10:01 1 comment:
Labels: language, machine, repairs

I suspect Ian Bogost has met the same journalists as I do, although I am baffled that they managed to track down Ian, seeing as they can't use google and he isn't in the Norwegian phone-book. From his post:

I wonder: instead of doing research myself on the story I am required to write, would you be willing to talk to me by phone for an hour about it? During this time, I would pose a series of basic questions that demonstrate how little thought and time I have given to the topic, not even enough to Google its key terms.