Why Joe Colombo would have loved tablet computers

I am lounging on a sofa-bed-futon in a small city apartment, with a laptop and a tablet computer right here. The tablet computer is resting on the side shelf of a Joe Colombo boby-trolley, the top of the trolley holds a kindle, a cup of tea and the equipment I need to do all of my banking and shopping: A plastic card and a coder. I have to admit I am quite happy that this isn't one of Colombo's future homes, despite their total, and incredible, design.

I am too much in love with the traditional crafts and the skill of a good carpenter. However, I share a fascination with the designers of the sixties, with Joe Colombo and Matti Suuronen, and yes, my ideal summer home would be a Futuro! Totally unsustainable, fully in line with the energy optimism of the sixties and seventies, it takes the "total home" one step further and into a science fiction movie.

What is it about Joe Colombo and Matto Suuronen, the plastic designs of the sixties and seventies, that is so enticing? For me, it can be summarised as integration, miniaturisation and mobility. The break with the classic materials and designs is less interesting.

While I love the Joe Colombo trolley I own due to the many different meanings it carries - mainly a memory of a surprising visit to an exhibition in Leipzig - I love the fifties Hans Wegner dining table, the eighties Gubi Olsen postmodern couch and, the iconic bookshelves that bring the module flexibility of Colombo back to the traditional carpentry romance of the postmodern eighties, Peter Lassens Montana bookshelves. Montana even adds something a lover of the user-as-participant as me can't resist: the chance to design your own bookshelf, building it like legos.

Anyway, back to Colombo.

Joe Colombo integrated the technology deeply into his designs, as seen in the Cabriolet bed. In this bed you can be closed in and privat with your technology. Technology becomes intimate, no longer something for the public space or workshop only, but a bed partner. Today he wouldn't have bothered with the radio and television though, he'd have gone straight for the computer with its endless options for media integration. The Cabriolet of today would have been wired, the temperature and fan computer controlled, the bed set with sensors to let you monitor your sleep. There would have been handsfree or hands on options for computer and telephone, controlled by magical touch-screens, voice or motion. And when he got out of the bed he'd have removed the phone or tablet from its cradle, and brought the whole set-up of connections with him, able to easily plug it into any other similar bed. Total personalisation but at the same time totally mobile: mass-production, total living space design and the miniatured storage of information. The Cabriolet bed was a step towards the connection machine/human, a sleeping space fit for cyborgs.

The futuristic dreams of the sixties were already dying in the seventies. The Futuro ski-cabin eminently demonstrates why: It needs to be connected somehow to electricity, water and waste, it is very costly to move and the material was not yet sufficiently tested to know if it would last. Which, in many cases, it didn't. The UFO did not have what it would take to give it wings. But despite the post-modern backlash in the eighties, when all styles mixed and it was all about reaching back to show the roots of design rather than deliberately breaking with them, the futuristic dreams had been accepted. We were expecting technology to invade the most intimate of spaces and to come with us everywhere. The urban nomads, as conceptualised by Deleuze and Guittari and described by for instance Cresswell in his article in the anthology Space and Social Theory do not move the living space with them, but instead bring along the technology which allows for easy movement from one dock to the next, connecting their network rather than parking their travellers' camper.

I just move my lovely red trolley from one room to the next, and not between cities or countries. But I do carry a phone or a computer, because I live, at times, like an urban nomad, travelling from one connection to the next. I am however even more liberated from the trappings surrounding me than the total designers of the futures past believed we would be. I don't need to break with the past through recreating the entire environment, because I am carrying the most radical break with time and space with me, in my pocket.

And I am certain Joe Colombo would have loved it, and created a design to rival anything Apple are able to come up with. Hopefully something bright, exuberant and one step further into a cyberromantic life. 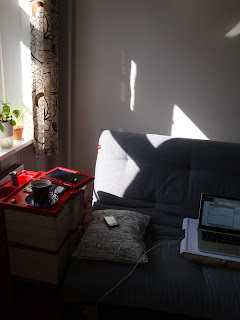 "Why don't you like The Road and Melankolia," my husband asked, quite reasonably. He has nevered shared my preference for fantasy and science fiction, just as I have never shared his love of social realism. We try to find common ground, and both items fit with things I otherwise love. How is the planet from Melankolia different from the Death Star? Why is the ruin of the United States in The Road different from and Dies the Fire and The Time of the Dark?

First of all, Star Wars, Dies the Fire and The Time of the Dark are all post-apocalyptic, not apocalyptic. Some little piece of humanity has survived, and while life is hard and oddly realistic, such as the roaming packs of cannibals around the dying cities of S. M. Stirling's after-the-disaster US, there is hope. The Death Star will annihilate all resistance, but there is hope. The dark is breeding humanity like cattle, and when they are forced to the surface the free-ranging meat which is humanity becomes prey once again. Still, there is resistance, and hope.

There is no hope in Melankolia. For a while there's false hope, as the planet pulls back, but in the end it goes from bad to worse. There is no hope in the The Road either. Nothing. It's the end. As literature and as art, it conveys the emotion and the sense of loss and despair with precision and gentle cruelty. There is no "post" to their apocalypse. Dystopia.

I need hope though. All I need to understand the fragility of the civilisation we enjoy is to read the paper. I have to believe that after the planet has become flooded from climate change and the melting of the poles, and 3/4ths of the population is dead, something, preferably something interesting, beautiful and optimistically human will create a culture among the scattered islands, rising from the drowned or broken cities. Not the final collapse of humanity..