The Hospital: Life in Copenhagen #10

The last 18 months have brought me in closer touch with the Danish medical system than I really wanted, and it's not over yet. I keep haunting the national hospital, Rigshospitalet, which is the main research, teaching and specialist hospital in Denmark, situated in Copenhagen and my local place to go. (And yes, "haunting" was a reference to "Riget", the Danish mini-series by Lars von Trier. It was my first and only impression of the Danish main hospital for 10 years, of course I think of that series when I go there.)

In most ways, medical care in Denmark and Norway is similar. Norwegian doctors have a little more time for each patient, but in Denmark I don't pay a fee for materials used during the consultation. Since the fee isn't high, I have to admit I miss my regular doctor and the fact that he had time to chat a little, ask some questions about what I was doing... but here I can get in quickly if it's urgent, I can just show up and I will get an appointment without waiting 3 hours. Both systems have benefits, I really can't say either is better.

In hospitals, they are a little more eager to toss you out. That says something, because it's not like you're allowed to linger in tax-payer luxury in Norwegian hospitals either. Some of that difference may be due to the smaller distances here. If I was in one of the larger specialist hospitals in Norway, getting back and forth would take from 2 - 8 hours by car, depending on what needed to be done. Most of Denmark is available in a 2-3 hour ride, and you'll have passed a lot of exellent hospitals on the way. There is no such thing as a remote place here, if you measure distances with Norwegian eyes. Actually, if you want to get out of the country, from most places in Denmark you can reach Germany in three hours (Sweden in 20 minutes from here). And since I live in the city, if I get a problem I can be back at the hospital in 15 minutes by bike, 5 if it's in an ambulance. And no ferries involved.

Since it's so close and convenient, yes, I ride the bike to get there. So do hundreds of others. At "Riget" the main problem isn't to park your car, but to park your bike. 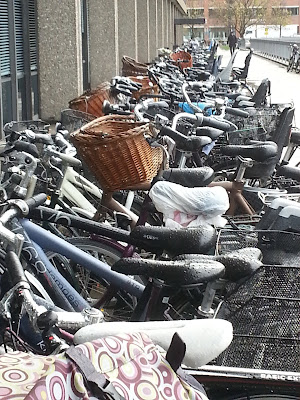 The buildings themselves are exellent examples of early 70-ies functionalist ugly. Concrete and stone, in huge squares. But if you pause to look around, it's actually not that badly built, and it's certainly decorated. Inside in the corridor where I walked today, the wall is decorated with a friese in a very typical funkis manner: The same material as the walls on both side of the friese, but the long friese itself is made up of colour variations, black, grey and white rocks mixed/set in concrete, and then sculpted into abstract shapes. It is as if the building itself has suddenly grown into this odd wall, the way a rockside can go from uniform grey to striped and broken into different colours and crystals, in order to return to the grey granite at the other side of that. 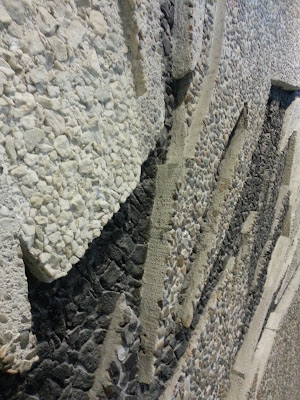 I passed two other works of art in the 30 seconds it took to walk out of there - one of them a very interesting 60ies sculpture of a young woman cast in bronze bearing a portable television monitor. I wish I knew what it would show if it had been turned on. The light wasn't good enough for a picture though - I may bring a real camera the next time. At the door there was a double mural - one to each side - in a very bright 70-ies naivism, and then outside I found a piece of art I have admired every time I came by - and been annoyed by how it is always crowded by bikes and delivery vans. Still the jewel-bright colours shone strongly after the rain today. I have yet to find how old this is and who made or donated it, but it does its job - it brings a little brightness into the front of what might otherwise easily be just another urban wasteland. 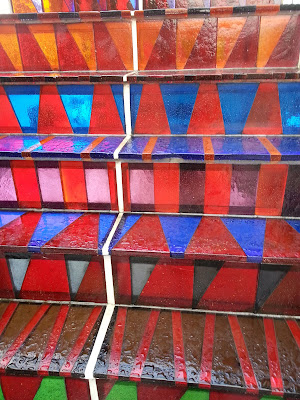 I was just going to let these last pictures speak for themselves, but there's this empty space here, and it looks really weird. So I'll end this with a question. I tried to google art at Rigshospitalet, but didn't find any good overview of the many sculptures, murals and paintings that dot that busy, eclectic space. Do any of my weblog readers have more luck? Do you know the secret words to use in google to find such an elusive documents? Anybody? 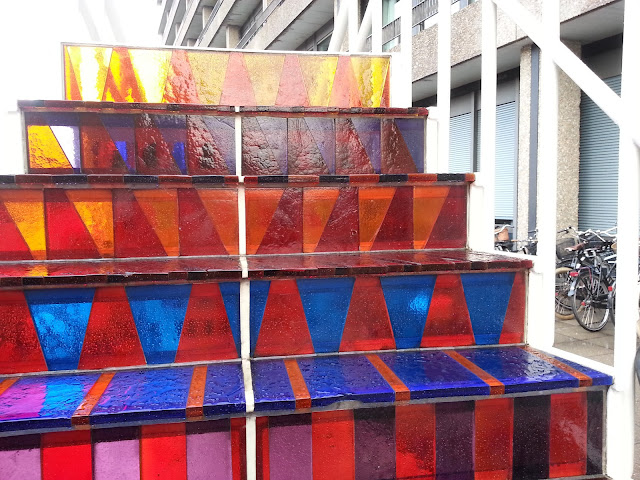 Notes on the usefulness of electronic books in reviewing

Using an electronic book in the review process is both more helpful and more problematic. Problematic, because it does not always (and in this case not) give page numbers. Helpful, because location is a much more precise notation, which leads directly to the sentence in question. Helpful, because it allows for quick searches, and it answers several questions to the book quickly, such as “how many times is this mentioned, and in which chapters?” or “where does the author use this theory?”

On the other hand, certain ways of organising the text, such as an endnote system for references, becomes confusing. The electronic medium resists the quick skipping from the chapter in question to the point in the back of the book where the footnote is positioned, and at least in this instance, the electronic text did not call up the endnote from its position in the chapter. Also, the numbers of the endnotes were not searchable, so it was very tricky to go from a number on an endnote to its position in the text. If the reference system had been anything which demanded the name of the author (APA or MLA for instance) put into the running text, it would have been much easier to go from reference to point in the text, but using endnotes the usefulness of an electronic text was reduced. Apart from these problems, the distribution of electronic books is still very limited, as it cannot be given away except as a loan, unless it’s bought as a gift.

This means that an editor can’t receive a book, look it over, decide on a reviewer and pass it on. The different systems of electronic book loans are not a good option, as one of the attractions of reviewing books is to be able to keep the book afterwards. A limited-time loan of an electronic book does not cover that reward. On the other hand, if the publishers allowed editors the right to pick and donate electronic books permanently to reviewers, the distribution of the book would be much quicker and more precise.

Today books need to be shipped over long distances, a process which delays the reviewing further. With electronic copies, the book could reach a reviewer at any internet connection, when ever they logged on. After working on the most recent book, I lean heavily towards making the electronic book the standard for reviewing, but with certain changes in the standards of reference systems, in the standards of electronic books, and a better and more liberal distributing system which retains the benefits of the physical paper copy.
Posted by Torill at 16:51 No comments:
Labels: books, ebooks, review
Newer Posts Older Posts Home
Subscribe to: Posts (Atom)