I find myself sighing with pleasure, as I settle down with my new computer. I knew it would be nice looking, because if it was just half as elegant as on the pictures it would be a great upgrade, look wise. Inside it has twice as much of everything as the last machine, my much loved and much used 12" XPS, also from Dell.

I thought I would be reluctant to give the other machine away. After all, I had it set up just as I wanted, it could handle everything I threw at it, it was small and light and I had found the perfect sticker for it. 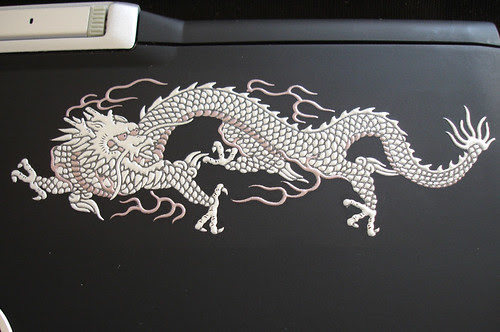 For a lot of different reasons, I invested in a monster machine for the home - a private computer for the first time in years. Here's a review of it, in Norwegian though. It's a totally oversized 17,1" lap-top which I would never have spent money on if I didn't have such a problem with my back and shoulders, to the point where I need to be able to have the machine on my lap when I work. As things are, that machine is just amazing!

I thought I was pretty much set by then. How could machines give me a new experience? High portability from the little Dell machine, extreme performance from the big Asus, and a hard working, decent desk-top in the office.

That was until I touched this one. First, yes that really is leather at the bottom there. It's smooth and begs to be touched - particularly contrasted by the steel. I find my fingers caressing the leather and wandering over the steel stripe to daringly approach the shiny black laquer finish of the upper part of the back of the screen. It feels like walking the edge, as I touch the place where brushed steel meets black laquer, in terror of leaving fingerprints, evidence of my dirty pawing.

But the tactile pleasures don't end on the outside. Last night, as I was busy raiding on the big machine, my husband, the "as long as it works" functionalist, picked up my new machine and settled down to see what all the fuss was about. He was tracing the details, exclaiming over the responsive touch pad, playing around with the control panel for sound and video where a mere touch to the back-lit signal is enough. And as his hands touched the keyboard he sighed, deeply content. I knew then that it wasn't just me. This machine is seductive, plain and simple.

I haven't REALLY tested it yet. No raids, no 12 hours of constant typing, no running of games, presentation programs and video projectors simultaneously. I may start hating it when it starts failing me at vitals moments like those. But at the moment, I find myself humming along with a-ha:

Touch me
How can it be
Believe me
The sun always shines on T.V

And I don't even like a-ha that much. Should I be worried?
Posted by Torill at 13:03
Labels: machine, mobility, pleasure, technology