There should have been some kind of face-to-face debrief after IR 11.0, and I will at some point in the not too far future write the AOIR board with what I think they need to know (functionality of the conference organising system f.ex.,) but for now I'll just take it here.

As some noticed, I was extremely ambivalent on facebook before I went to Gothenburg. I was ambivalent in real life as well. Although some felt that there was good reason to criticize the decisions I had made about the schedule and the responses they got to their requests before the conference, neither decisions nor responses were based on lack of consideration. I had a certain number of rooms, a certain number of contributions, and a certain number of hours, and I had to make all of that sum up to a functional conference. However, the scheduling, gruelling work that it was, was just the tip of the iceberg. It covered the last 4 months of a one-year effort, an effort that started in October 2009.

This conference removed that already elusive concept "spare time," and even cut into the sacred raiding time. Rather than settling to blog, play with photos, write friends or chat, when I picked up the computer I'd start responding to emails or work on some conference detail. I am not whining. You see - I liked that. I got to write a lot of people I have not seen for years, people I have only read (about) and some total strangers who turned out to be extremely interesting scholars. What's not to like!

However, I did get tired. The last weeks before the conference I just had to give up on raiding all together, because with teaching and administration and the conference, I was working 10-12 hour days. Not quite that long weekends, but still, it's not like I followed regulations. And so, as the conference approached I dreaded it more and more, as the workload just kept increasing.

Most things went right. Some went wrong, and nobody could have done anything about it. (I am still really sad about Jon Bing being ill though. I think that was the biggest low of the conference.) Some were fixed before they went really wrong. But most of all, I loved the fact that people were happy there. The compact conference site, the excellent food and the work people put into their presentations and their research - as well as into each other - made it all work out surprisingly well. And the feedback afterwards still warms me, even if I was so spent at the banquet I couldn't even say thank you politely. 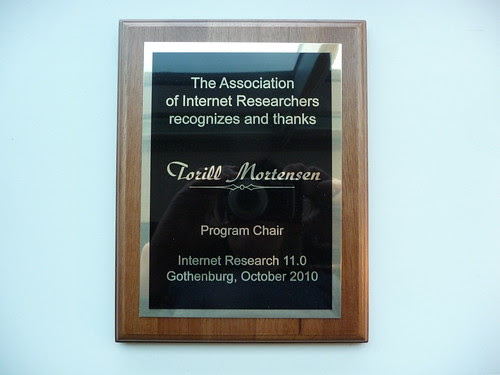 I am still proud of this plaque though, although I really don't know where to put it or how to deal with actually owning it. Makes for a fun conversation piece, and yes, it does warm, along with the praise on the aoir list and the twitter stream, now that I have realised the conference was a success!
Posted by Torill at 14:21
Labels: AoIR, conference, Copenhagen2010, IR11_0, personal