Can I still buy Lego?

A picture from an old ad flashed around the internet with viral speed a week or so ago. It's a little red-headed girl, holding out her colourful, glorious Lego creation. The discussions and the issues this brings up has touched me both personally and as a researcher looking at play, games and leisure. Lego has long been the benchmark of free creative toys, dominating the market with their simple and sophisticated idea. 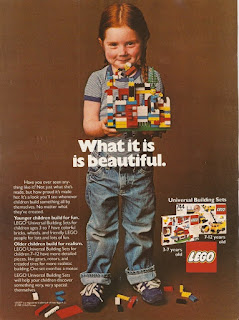 This was the Lego ideal when I had children, and it's the lego they grew up with and loved. We still have loads of the toys, one of the few things we did not throw out in the move, and now that our daughter has more room, I expect her to take them home. I loved my own Lego pieces, particularly when my father or older sisters would get down on the floor with me to play. There was this sunny spot on the floor which was like made for a long afternoon building odd creations.

When my sister had kids, some 15 years later, we started looking for Lego for them. It wasn't really that easy any more, because it had all become extremely gendered all of a sudden. The different stories that could be told with Legos had taken off, and where my kids could have a kingdom's castle (which was great, female characters make as good knights as the male ones), 10 years later the options were much wider - and almost all for males. Ninjas, Star Wars, Pirates of the Carribean - girls could still play with them, but it was clearly aimed at the tomboy side of girls. If we wanted something neutral, it was getting tricky. For years, we actually stopped buying Lego, because buying the boy-stuff for the girls would have made it seem like a present for the boy. We did not want to encourage the gendering of toys by getting him space-legos and the girls crayons, so it ended up with crayons for everybody. But we kept looking, and once in a while we'd find a nice design, a house, some cars, some animals. We still loved Lego, you know.

The last few weeks have made me seriously reconsider that love. Lego has redesigned their toys - supposedly after four years of research - and created a girly line. I am stunned. Here I was, happily thinking I'd just have to wait out the space-ship and pirate runt of the last few years, and I'd be able to find lovely, gender-neutral Lego again. Instead they go dramatically in the opposite direction, gendering the toys beyond recognition. 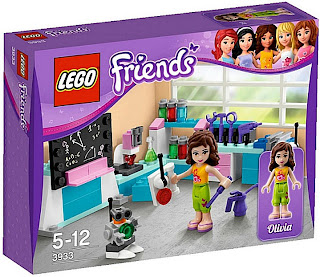 Check out more pictures from the new Lego sets at Geekologie and Stylist.co.uk, and have a look for yourself. The figures are no longer compatible with the other lego sets, so if the girls want to create a pink-suited space girl to fit in the rocket and use the same gear as the boys, they can't do it. They can't put them on the horses, they can't work the farms, they can't fit the police uniforms  and they certainly can't fit a hard-top over their styled hair.

Lego, I understand that girls have been telling you they want more stuff for girls. I have been looking for more good stuff for girls myself. But I have not been looking for yet another arena where boys and girls are shown that their interests and activities can never mix. The beauty of Lego was that it could all integrate. If I had wanted to get plastic toys with more realistic figures, different shapes and standards that didn't match the other toys, I'd have bought Playmobil!

Instead I would have liked to see a bakery next to the car-wash or a complex model of a cupcake factory or a dairy - have you ever looked at those? They are the model-train enthusiast's dream come true! Why not let the girls have pink space-suits, purple cars and sturdy female ambulance drivers in the same fit and design as the rest? The Lego universe is potentially as diverse as reality as it is, and yes, a kitchen in bright colours would be cool, but can't it fit in right next to the command bridge on the death star? Even evil villains taking over the universe have to eat, you know.

This all makes me want to go stick my head into SWTOR and never come back out. In there I can be female and look gloriously competent and dangerous, in armour sets that do not bare my boobs, either. Thanks, BioWare. The next toy I buy for a child of any gender may be a digital game.
Posted by Torill at 12:20
Labels: design, feminism, freedom, games, geekstuff, gender, marketing, toys

Hear, hear. The whole thing has made me deeply cross and sad, and far less inclined to buy Lego for any future children than I otherwise would have been.

"and yes, a kitchen in bright colours would be cool, but can't it fit in right next to the command bridge on the death star?"

The great thing about legos, at least in my experience, was the way everything fit with everything else. Dump them all together and make something new and it didn't matter what set they came from. This changes that, and for no apparent benefit.

Beside that, I'm not a fan of the "pink means it's for girls" concept. That looks like a science lab, which would be great for male or female, just by using normal colors and having a variety of head choices.

Lego have had their very pink girl-series Belleville for ages. I can't understand the ramblings now about them all of a sudden going gendered.

Besides - my daughter (age 7) loves the buildings from the Creator-series.
http://creator.lego.com/en-us/products/default.aspx#5891
And the Castle-series - where she can play with queens and princesses. And when my boy gets a bit older (just turned 4), I can't see why they can't play together - with all the things for Lego City: she with pizzaplace and houses and families, and he with the airport and policestation) or Lego Castle: she with the village and mill and queen and maids; he with the knights and robbers from the forest.

I suspect the "all of a sudden" buzz has to do with the most recent Lego campaign. For instance, have a look at this blogpost from Sweden. For English speakers, it's the post of an outraged mother who received a promotion box with four pastel coloured legos and the claim that the new girl-orientation of Lego is closer to reality.

And of course the kids manage to play together - my kids made movies with teddy bears and dolls doing karate moves and attacking each other with baseball bats and other sports gear. Children manage to cross and mix the expectations of culture in wonderful and unexpected ways.

Lego is however not a random universe of everything possible in a toy-box. It's a planned and designed universe, where gendering is increasingly obvious. They have, to a certain degree, designed themselves out of the gender neutral image it had, and into a corner where they have lost almost half their potential customer base. And they try to fix that by increasing the gendering along extremely stereotype paths, rather than reinventing the earlier gender neutral middle ground.

This is not a criticism of childrens' ability to circumvent the plans of designers, it's a criticism of increasingly gendered design and how it steers our expectations of childrens' desires and behaviour. It even shows in your comment: you expect the girl to be able to play with the boys' police station and airport - you are projecting a gendered idea about what toys they will enjoy, for your boys as well as the girl.

And this gendered design comes back in everything for children: Clothes, bicycles, backpacks, sportsgear. Skis are for instance something that really should be passed from the older to the younger, as they never last more than one season. But with the extreme gendering of sports gear, if you have children of different genders, that becomes problematic, as boys and girls have learned the lesson of blue and pink very well. And as long as nothing is red, green or yellow - or any other gender-neutral colour - parents give in to the need to buy new gear for the child of another gender, to save their children from peer pressure and ridicule.

Lego might have had the Bellville series for ages - but they have kept it carefully apart from the main Lego brand (as you will see if you check the Lego homepage), perhaps for a very good reason.

I miss when Lego was just pieces to do what you pleased. Like the girl in the picture. To make things of nonsense that fulfilled a range of challenges (oh no! only 2 grey flat panels left!). The blue, yellow, white, green, red, and grey pieces. the random sets of wheels and rooftop shingles that could be attached to anything.

My sister inherited our family's Lego's from the '70's - and while her children have ample "new sets", they still prefer to play with the big mixed box of pieces.

Also, I agree that they should at least make all sets compatible - I just don't understand why they wouldn't...I just can't believe that after years of market research what they found was that girls wanted sets that were incompatible with their brother's Legos....