Also known as Epiphany, Three Kings Day, and the night before as the Twelfth Night, the 13th day of Christmas marks the end of the celebrations. Or, as my mother said: "13 dags Knut feier jula ut." I have no idea who Knut is or why he would sweep Yule out, but it's a good date for cleaning up.

And so I have been packing, sweeping, carrying and stashing ornaments all afternoon. This year the tree was tiny (by our standards), but I had to do all the packing up and carrying out alone, something I have never, ever done before. 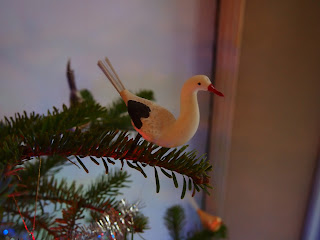 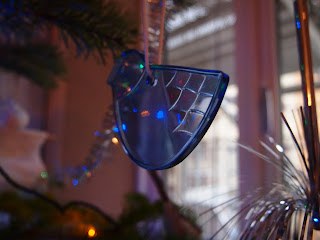 This year, due to the size of the tree and the amount of ornaments I have collected in the 26 years we have been a family, we had our first dogma-tree. A dogma-tree is a tree with a topic, and the topic this years was birds. As some may see, there's a little bit more than birds there. We filled in with some stuff we pretented to be frost and icicles, and pine-cones. The real discussion was as to whether a butterfly can be said to be a bird, and does it belong on a pine-tree in December? The yes-side won, through a democratic process. A good thing we were an uneven number present during the decorating. 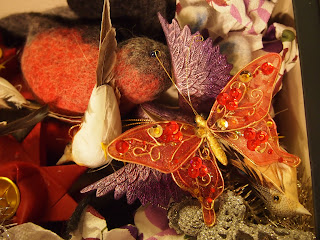 The first thing to get packed up was the second thing I put up: The advent wreath. This year's wreath had been lighting up the stairwell with it's overwhelming lights: shining, white roses. My sense of style is kicking my shin hard every time I am close to admitting that I actually love the string of lights in rose-shape, because they were a lot bigger and more prominent than I expected. But I will find a way to use them next year as well, if nothing else to honour my father, who more than anything loved colourful, abundant lights for Christmas. He'd have adored the roses, and might have wanted to keep them up all through the winter. 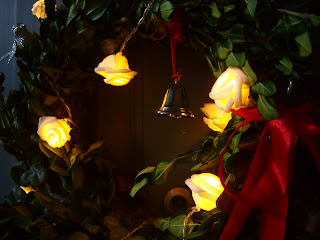 My favourite thing is the advent star. When you drive along the dark roads of Norway in the winter, often the only thing that lights the side of the road are the lights in the houses. Late, when all have gone to bed, there's not much, a few outdoor lights, a window where somebody are working late, the flicker of a television. But during advent, there are stars and seven-armed electrical "candlesticks" in every house, often several - one in the kitchen, one in the living room, one to the side... We use a very old real candlestick, from my husband's family, for the 7 candles and never in the window, but we always have an advent star. I have always loved the muted light of the star, and I sneak into the living room to turn it back on if my family have been sensible and energy-conservative and turned it off before going to bed. The soft light at night is the colour of expectations and secrets, and comes with the scent of cookies and the sound of sewing machines, of conversations I am not supposed to hear, and the memory of waking up really early to see how the rooms are transformed, night by night, into a nest of Christmas cheer. 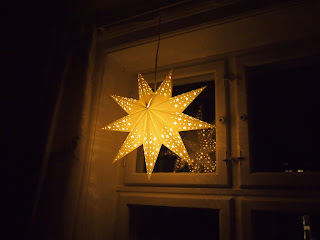 But now it's over, it's all boxed up, the tree is in the yard, the star in the cabinet, the birds and the glitter packed down. Tomorrow I'll bring the last few cookies in to work, and then I'll make soup stock from the bone of the dried sheep leg (fenalår) I had for Christmas. It's over, until next year. 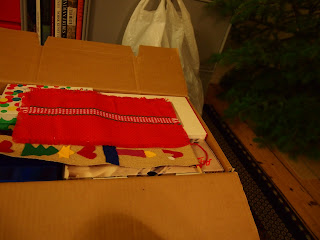